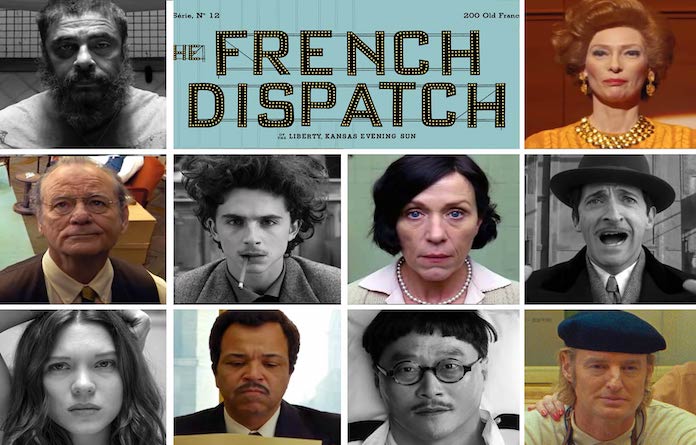 In the world of movie reviews, I try to be someone who fits. I started doing this because I’m a movie fan, and sometimes I write something that makes sense.

But again, like everyone else, I want to be accepted and always feel like I belong. So, hearing about Wes Anderson’s new movie “The French Dispatch”, I knew I had to take it up a notch. I went back to “The Royal Tenenbaums”, “The Fantastic Mr. Fox”, “The Grand Budapest Hotel” and “Isle of Dogs” – all films directed by Anderson. In fact, I was a bit arrogant and proud to have seen so many of his films.

Thinking back to my mental notes, the words “quirky, strange, witty, quick and visually stunning” came to mind. Indeed, most of the Anderson movies I’ve seen are all of that and more.

However, there are times when I watched his movies and most likely had a puzzled look on my face. I hide it well, because I do not want to stand out and come across as an impostor.

So I went to “The French Dispatch” knowing that I had to be on my guard and in full attention. I was immediately won over by Anjelica Huston’s witty and fast-paced storytelling, but I also immediately felt my head spin.

Add to that a large group of “known to many” international movie stars and you have a cast that looks so well-equipped that there is no room for failure. Add to that the wonderful visual cascades of symmetry and the use of vibrant colors, as well as humorous little pushes here and there.

You continue to hope that things will slow down a bit, make sense, and keep your interest.

But after a while, the visual wonders, star-studded cast, and eccentricity aren’t enough to hold your interest.

The four vignettes, based on stories one might see in The New Yorker, are so packed with action and dialogue that it’s sometimes impossible to stay interested and (swallow) awake. Sometimes it’s too fast and sometimes it’s unbelievably slow. I couldn’t even begin to explain the plot, if there is one.

Anderson fans will call me a hick and a hayseed, but I would venture to say that even diehard fans will find this offer a little confusing. Yet the cast coupled with Anderson’s great admiration for the character of The New Yorker make you keep staring and wanting to be part of the joke inside that they all seem to be on.

Fun to watch on the big screen, just for visuals and your favorite movies. Also, I guess I would understand better if I saw him a second time. But I wouldn’t pay for a second ticket, I’m afraid.

The French Dispatch is now in theaters and lasts 1 hour and 43 minutes. The film is rated R for graphic nudity, certain sexual references, and language.