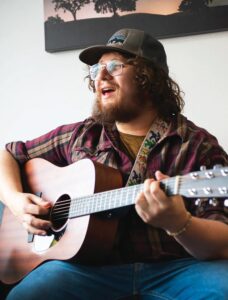 The Dakota Gray Band originally started as a solo project in 2018. With the namesake Gray playing the mandolin, he would play shows alone across Colorado using the instrument. However, over time he brought other friends on board to join him on stage, and slowly the project grew into a five-piece bluegrass band.

Just as they started playing together more frequently, COVID soared across the country, stopping live broadcasts in their tracks. In the summer of 2021, however, as venues began to reopen, the band played more regularly in the Denver area and, as Gray himself pointed out, “has been thrilled to play in many places ever since. new places.

Prior to this band, Gray formed a four-piece band in southern Illinois with friends of his in 2014, around the time he started playing the mandolin. After that band ended in 2015, he started a jam band with some other friends of his called Porch Fire, which he played in for about two years.

Gray had been a caretaker for a family in Evergreen, Colorado for two years, but in December the person he was caring for died. Since then, Gray has been a full-time musician, performing as many gigs as possible while looking for another job. This led him to consider looking into music as a full-time career, potentially returning to school in the fall to earn a degree in music business.

Gray loves everything about being able to perform live and loves the idea of ​​performing in as many areas of Colorado as possible. This year, he wants to expand his performance reach outside of the Denver area and play more in the mountains. Hopefully more people will come and experience his live shows as he works to expand into other areas.

You can catch Dakota Gray performing a solo show at Busey Brews, 70 E. 1st Street in Nederland, on Sunday, February 20, 2022 at 2 p.m. For more information on Gray and the band, visit www.facebook.com/dakotagraymusic/ and their Instagram group @dakota_gray_. Here are this week’s live music listings! Check it out and support your local musicians.

Did we miss your music list in the Peak to Peak area? Do you have any updates regarding your business? Please call 303-810-5409 or email [email protected] to be included in the next edition.