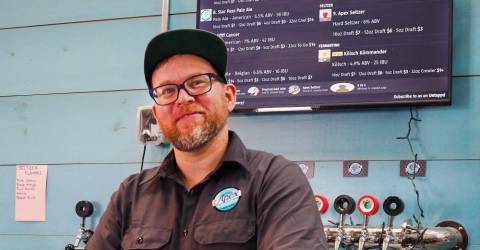 Locals flock to Apex Brewery in Monroe, NY for its wide beer selection and welcoming atmosphere – led by owner David Holm’s belief that beer is for everyone.

“Someone approached me in the brewery and said ‘It’s really nice to come here because you’ve built this sense of community in your tap room… It’s almost like we were invited into your living room to hang out at a house party,” Holm said.

Holm opened Apex in October 2019, but his journey as a beer brewer began at home over 15 years ago.

“I actually built my own three-vessel home brew house, basically a ten-gallon batch size,” Holm said. “I built my own gear…and got a much more accurate setup instead of throwing it in the cooler and hoping for the best.”

Today, Holm has greatly expanded the ten-gallon batches he made at home. Apex – described as “halfway a microbrew from a nanobrew” – prides itself on its variety, from “Quadrobeania”, a Belgian quadruple brewed with coffee, to “Star Pass Pale Ale”, which includes Monroe hops and notes of raspberry, orange, pineapple and passion fruit.

This summer, the brewery is hosting cornhole tournaments every two weeks, live music on Saturdays, and trivia nights on Sundays. In time, Holm also hopes to organize various charity events.

Here are some of the upcoming brewery events in July:

● Sunday, July 3, from 3 to 5 p.m.: Quiz night hosted by Half Pint, including four rounds with individual prizes for each. The winning team receives a round of beer. Plus, the Cousins ​​Maine Lobster food truck will be on hand.

Apex is one of many local breweries that will be offering unlimited beer samples at the Black Dirt Beer Bash on Saturday, September 10 at the Sugar Loaf Performing Arts Center. Discounted early bird tickets are available through July 4 at blackdirtbeer.eventbrite.com.

The Hallmark movie will be filming in Salisbury next week