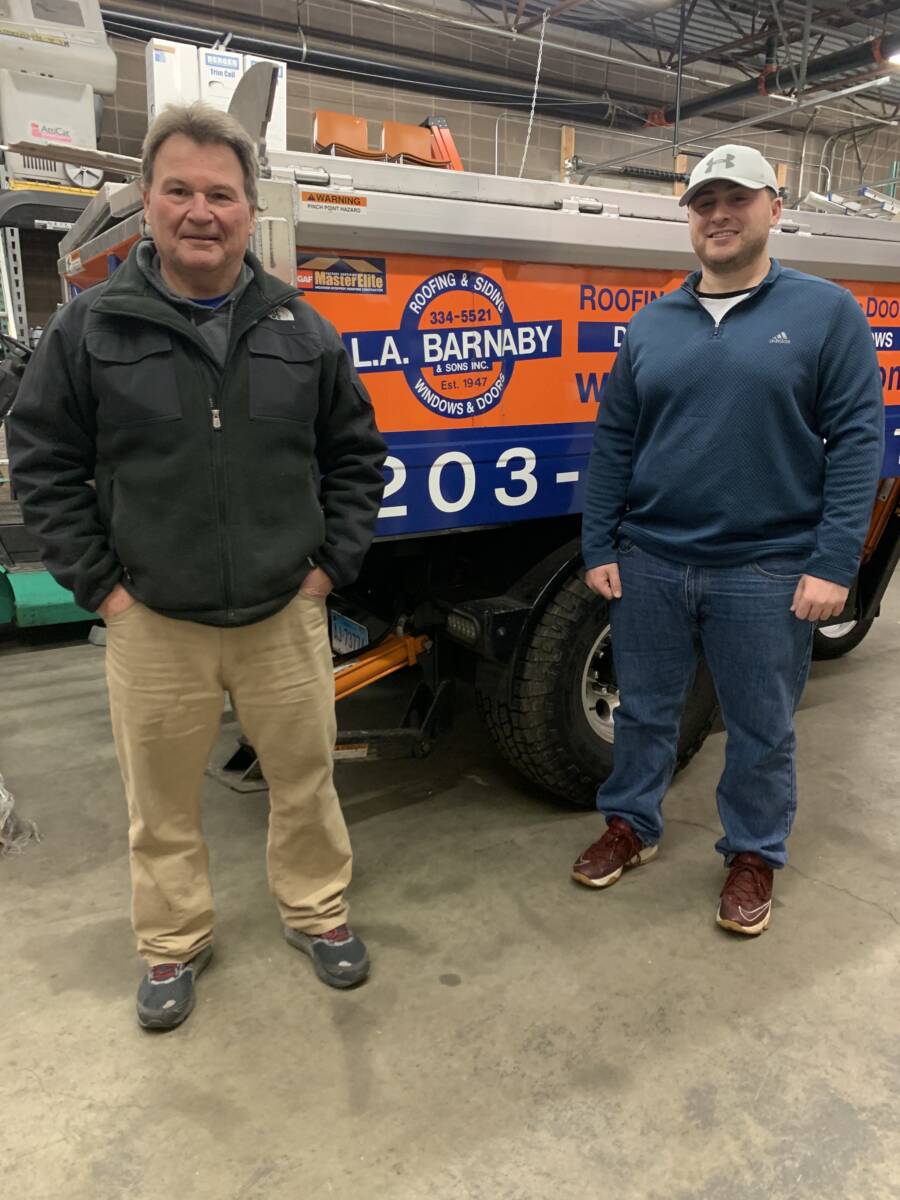 MONROE, CT – LA Barnaby & Sons Inc. is synonymous with longevity and customer service. This year, the family business celebrates its 75th anniversary. Leon Barnaby and his son, Brian, have found the right recipe to grow the business in today’s challenging times.

The Stratford-based roofing business was started by Leon Barnaby Sr., a sailor and World War II veteran, in 1947 and Leon Jr. started helping out in the late 60s.

“We were four brothers working for our father,” Barnaby recalls of the early days.

Eventually Barnaby’s brothers moved out, but he stayed and took over the business. His son, Brian, joined the business 15 years ago and guided it to where it is today. In addition to roofing, LA Barnaby & Sons is an industry leader in siding, windows, doors and decking.

“I love working with the customers and the different trades that we employ – and seeing the advancement of the industry,” Barnaby said.

Barnaby’s son, Brian, an alumnus of the Masuk High School Class of 2010, played guard for the Panthers state championship football team in 2008, under the head coach of the era, John Murphy.

Brian started helping out in the warehouse at the age of 14 and as he grew his responsibilities expanded from picking up materials to working on construction sites. From that point on, he moved into the company‘s sales and marketing.

The Barnabys also have two daughters, Jennifer and Stacey, both Masuk graduates. Barnaby said he and his wife, Donna, were delighted to introduce the newest member of their family, their first grandchild, Patrick Henry, after Stacey gave birth eight months ago.

Do you do windows?

When Leon Barnaby Sr. started roofing in the 1940s and 1950s, Brian said his grandfather was often asked if he also made windows and doors. Over the years, LA Barnaby & Sons has expanded its product line to include roofing, siding, windows, doors and decking.

Although the company advertises and has a website, Barnaby said the majority of its business comes from referrals from satisfied customers. They also get repeat business. For example, Barnaby said his father replaced some roofs in the 1940s, and then the company returned to do so twice more over the following decades.

“Often we have the same file from the original job,” Brian said. “It’s an old-fashioned business.”

LA Barnaby & Sons is an Accredited Company with the Better Business Bureau and is GAF Master Elite Contractor certified. Master Elite roofing contractors represent only three percent of all contractors in the United States

“We align ourselves with the best manufacturers in the country who offer extended warranties and the best products on the market,” Barnaby said. “Relationships in this business are everything.”

At a time of supply chain issues amid the COVID-19 pandemic, Barnaby said their strong relationships with distributors have helped LA Barnaby & Sons get the materials they need faster.

Brian said the biggest change in the roofing industry since his grandfather started his business has been advancements in technology.

“Back then, you measured the roof by hand,” Brian said. “You would have a detailed formula. There are roofs that you cannot see from the ground for which you should climb a ladder and climb onto the roof.

“We can go straight to the shingle,” Barnaby said of the precision.

In the past, Brian said a contractor could miss the number of shingles needed for a job or overestimate and have to pick up the extra costs.

“There are savings that we pass on to our customers,” Brian said.

They also have the Equipter, a small self-propelled dumpster, which makes it easy to remove old tiles and coatings without major damage.

Another change over the years is the focus on energy efficiency, Brian said.

In 1992, Leon and Donna Barnaby bought their house in Monroe, three days before Brian was born.

Barnaby said they were drawn to Monroe’s sense of community and the school system, where their three children excelled, earning doctorates and graduate degrees. “I attribute that to the Monroe school system,” he said.

Over the years, Barnaby became involved in city government, serving on the Zoning Board of Appeals and the Planning and Zoning Commission, where he was involved in the adoption of a municipal conservation and development plan. He was also a member of city council for six years and a member of the building committee for the Edith Wheeler Memorial Library.

Barnaby volunteered as a coach for the Monroe Little League when Brian played baseball and Barnaby served as league manager.

Livre, the Charlies Mars concert invites you on a journey through the musical past