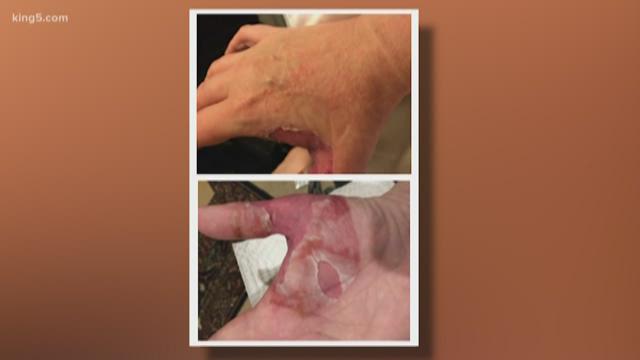 Families say they suffered from various health problems after being exposed to toxic chemicals at Sky Valley Education Center in Monroe.

According to the lawsuit filed in King County Superior Court, the Sky Valley Education Center documented contamination in 2016, but the problems date back several years.

Three mothers appeared for a press conference at the Friedman Rubin law firm in downtown Seattle on Wednesday. One was a teacher at Sky Valley.

“This is a matter and a public safety issue that I believe deserves wide attention,” said attorney Sean Gamble.

The chemicals are polychlorinated biphenyls (PCBs). Monsanto was the only manufacturer of PCBs banned in the 1970s. Monsanto promoted the chemicals, Gamble said, without alerting anyone to their harmful nature.

Stacy Mullen-Deland was a Sky Valley Spanish teacher and parent of school children. She and her children often suffered from sore throats, but would feel better when they weren’t around, she said. They liked school and were reluctant to believe that was the problem.

All the doctors they saw, she said, said they were suffering from chemical poisoning. She said her son was so weak he could barely walk. He had to take heart medication for six months. Her daughter was bleeding regularly from her nose. She often missed school, they were so bad. She hasn’t had any since they left.

“I didn’t expect this for my kids,” Mullen-Deland cried. “You couldn’t get me to step foot in this building.”

They complained to the school administration, but to no avail, she said. In early 2016, she says they begged them to get the school out of the building.

Up to 14 million students nationwide can be exposed to PCBs in schools, Gamble said.

The lawsuit also holds Washington State and the Monroe School District responsible, saying the two knew PCBs in school buildings could cause health problems, according to a 2006 state study. In 2007, a survey was carried out on these school buildings, finding that the level of deterioration of the facility was the most severe in the school district, known to be contaminated with PCBs. Instead of shutting down, the Monroe School District continued its education at the facility.

Despite state security requirements, Gamble said, the school buildings remained open. PCBs were in the lightweight ballasts and caulk, and as the infrastructure deteriorated, chemicals were released into the air.

Gamble calls light ballasts “toxic hand grenades” because of their gas release problems. They can also drip PCB fluids onto desks and carpets.

An inspector has also found radon, lead and asbestos among other toxins, but Gamble says the lawsuit focuses on PCBs because they are the most dangerous.

More than 100 people have reported health problems from the buildings over the years, but Monroe waited until 2016 to take action.

“The state and local government agencies have let the Sky Valley community down,” Gamble said.

In the summer of 2016, the Ministry of Health ordered the rehabilitation of the buildings. KING 5 spoke with a mother outside of school on Wednesday. She says the staff have been very open about the renovations and thinks her child is safe now.

Jill Savery disagrees. She told the story of her two children, also students at Sky Valley. They participated from 2011 to 2016.

One of her daughters had multiple headaches and stomach aches that turned into a rash and sleeplessness. Her youngest daughter had severe peeling skin. They loved the school program because parents could be involved in their children’s daily life. It was like a second home.

“But in a facility that poisoned us,” Savery said. “We trusted everyone who was involved in our move to this building.”

Eventually, her daughter had seizures at school. Savery says she is appalled at the way the situation has been handled by the school district and the state.

“It has changed the lives of many people forever,” she said. “How dare that happen. We trust you.”

“… Air quality issues at Sky Valley Education Center, including potential contamination with polychlorinated biphenyls (PCBs), were first raised during the 2013-2014 school year. Following guidelines from the Environmental Protection Agency, the district has identified and cleaned up all Since then, the district has worked aggressively and proactively to resolve all possible air quality issues, including PCBs, at SVEC. and federal laws, and replacing and upgrading aging parts of the building as needed. ‘ensure the absolute safety of its students and staff. has been transparent about its efforts and has provided regular updates to the t The SVEC community regarding the many measures it has taken to r address these concerns. The district’s priority and number one commitment is the safety of its students and staff, and the district has continued to closely monitor the air quality at the facility, even after recent tests failed. indicated no detectable level of PCBs. “

“Over 40 years ago, the former Monsanto voluntarily stopped the production and sale of PCBs before any federal requirement to do so. Back when Monsanto was making PCBs, it was a legal and approved product used in many useful applications. Monsanto continues to investigate the allegations contained in the complaint, but we believe that we will find this case lacking in merit and we will defend ourselves vigorously. ”