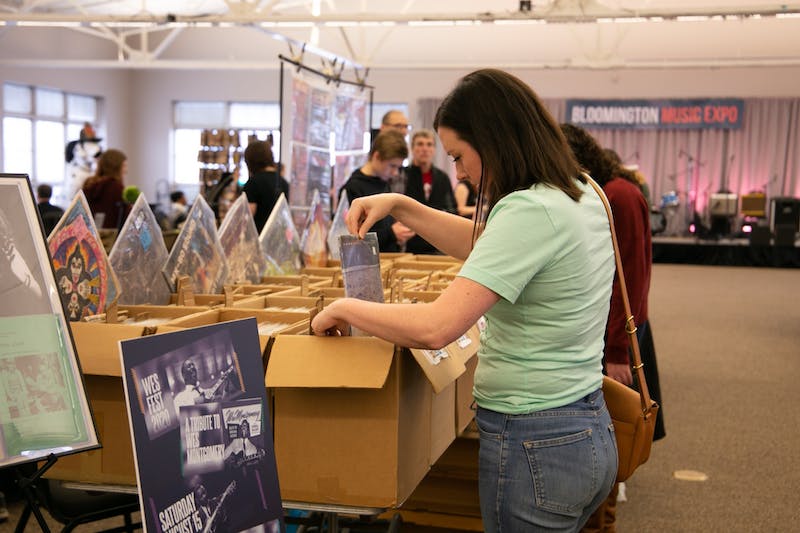 The third annual Bloomington Music Expo will be held at the Monroe Convention Center from 9 a.m. to 4 p.m. Saturday. Admission is free and musical merchandise will be sold as artists perform live.

Local DJs from WFHB, a community radio station in Bloomington, will be spinning records from 10 a.m. to noon. Starting at noon, shows for all ages will perform for approximately 45 minutes each.

Mike McAfee, executive director of Visit Bloomington, said the first Bloomington Music Expo took place in 2019. Owners of Landlocked Music and WFHB, venue owner Orbit, McAfee and some people from Secretly Canadian spoke about the request from a vinyl show in Bloomington and decided to make it happen, McAfee said.

As a vinyl collector, McAfee said listening to music on vinyl is a listening experience, unlike online streaming platforms. He described the records as works of art.

McAfee said the event is for everyone, from kids picking up their first vinyl record to people who have been collecting vinyl for 60 years. His goal is to turn the exhibition into a two- or three-day music conference in the future.

There will be about 16 or 17 vinyl vendors at the expo, and McAfee said some of them will bring in thousands of records. Posters, t-shirts, CDs and other items will also be sold. Venues such as the Buskirk-Chumley Theater and IU Auditorium will also have booths to promote events and provide volunteer opportunities.

Author Stephen Deusner will also be at the exhibit to talk about his book “Where the Devil Don’t Stay: Traveling the South with the Drive-by Truckers.” The book is about the traveling rock band Drive-by Truckers and was declared one of the best music books of 2021 by Rolling Stone.

American musician Jason Wilber will perform at the expo after about 30 years of touring. He’ll be playing songs from his spring 2020 album “Time Traveler” along with some of his previous records.

“I was inspired by records when I was a kid,” Wilber said. “I really wanted to put those vinyl records on the platter of a record player and drop that needle in there. It kind of transported you to another world.

“It just creates a very fertile environment for collaboration and learning and being inspired by other musicians and discovering new music and things like that,” Wilber said. “So I think that’s why Bloomington has spawned so many great bands and musicians.”

Mike Klinge, owner of The Orbit Room, will host a Friday night launch event with an afterparty on Saturday for adults 21 and older.

Proof of COVID-19 vaccination or a negative COVID-19 test within 48 hours prior is required for all of these events. Masks are mandatory in Monroe County.

Who is in the movie on Netflix?

First clip from new music documentary ‘This Much I Know’ – Deadline